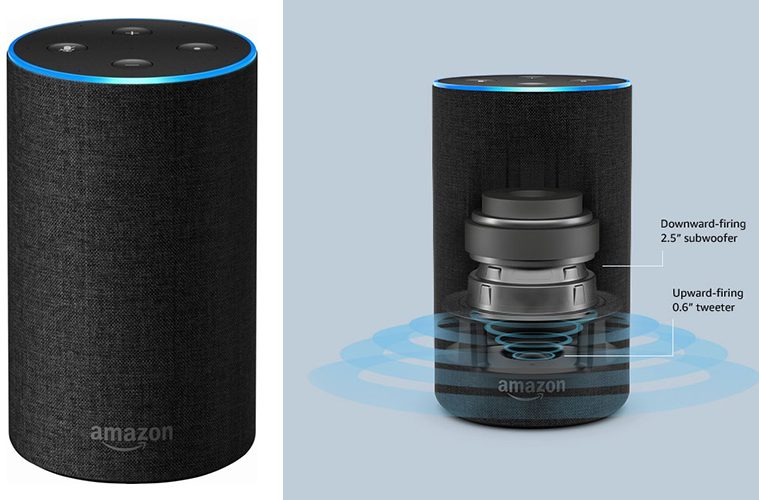 The Amazon Echo (2nd generation) is the latest offering in the world of smart speakers from Amazon. The smart speaker industry has the potential to grow exponentially with brands like Google, Microsoft and Apple all interested in taking this industry by storm. People have been using Amazon smart speakers to listen to music, order items on Amazon, managing shopping lists and more. The second generation of the Amazon Echo intends to continue that trend.  We look at some of the changes that have been made in the 2nd generation and is it worth buying it if you already have the 1st generation Echo.

Starting with the most major change, and perhaps its greatest strength, is the fact that its price is almost half of the original Echo. This makes it a tempting proposition for those who would be buying their 1st Echo. Coming to the other changes made in the 2nd generation, design and appearance is a significant portion. The Echo is now almost 2/3 of the height of the original and broader in diameter. It also comes with decorative fabric shells which are definitely a nice touch and add to the looks of the Echo. There are other plastic shells available in the market that either provide a wooden or metallic feel. In a bid to improve the experience, features have been added to improve the audio quality of the Echo. Most of the Echo customers use it for music listening purposes. To improve the Echo in this regard, ability to connect the Echo to a larger speaker via Bluetooth or an auxiliary cable has been added.

Existing owners of the 1st generation may not find the worth to invest in the new Echo. This is mostly because, in terms of features, the new Echo is not much of an upgrade.  Dolby processing has also been added to improve the quality of 2.5 inch sub-woofer. Sadly, on the basis of tests so far, there isn’t much improvement over the previous generation.  Another department that does not see much improvement is the microphones. The Echo would hear you most of the times in the first go even if music is playing. On rare occasions, you would have to repeat yourself though the performance is largely consistent in this regard. Also the plastic shells are not up to the mark as they come off as cheap and does not achieve the desired effect.

Conclusion
To sum it up overall, the new 2nd generation Echo is an attractive package. There are a few disappointing aspects of the device. The sound quality is a bit subpar especially compared to its competitors like Google Home. Also, one can also complain with regards to the built quality as well but you can say that it’s a fair trade given the drop in price.

Most customers are generally happy with the performance of the new generation. Old people and people with disabilities find it to be a useful tool with day to day operations like making a phone call. If you are on the lookout for your 1st smart speaker, look no further than the Amazon Echo.
Sound Quality
Durability
Technology
4.7
Available On
Amazon